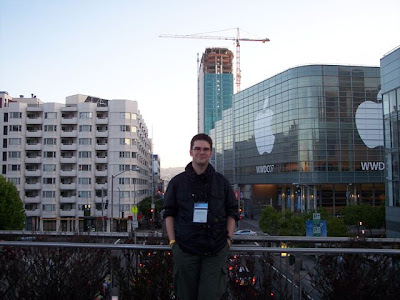 I'm back home since Sunday morning. On Friday I had lunch with some of the guys I met at WWDC, it was very nice and I'll try really hard to stay in touch with them.
In one of the afternoon sessions I started writing a small WebKit based application. It is still lacking a few features but as soon it's halfway useable I'll release it here (remember: release early, release often!).
Around 7 PM the family I stayed with in San Jose picked me up. They are really wonderful friends!
While I was waiting outside the Moscone Center I met Pierre Frisch. He seems very nice and I really enjoyed his session about WebObjects - something I definitely want to try out. Some people call it "Cocoa of the web."
After we spending the last eveningwith my friends at a great Burmese restaurant in San Francisco they dropped me off at the airport.
I was suppossed to first fly to Houston, then to Newark and then to Hamburg. The flight to Houston was overbooked so they put me on a direct flight to Newark. I arrived there at 8 AM but my flight to Hamburg wouldn't leave until 6 PM. So I decided to take a bus to Manhattan. 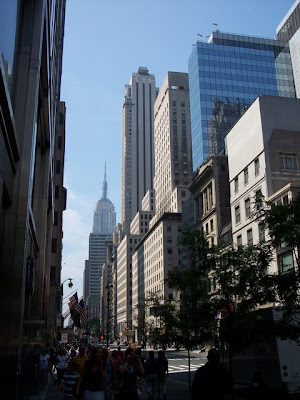 It was a beautiful and sunny day and I wanted to go back to NYC since my first trip in 1998. So this was a very nice surprise!
The only bad thing that happened was this: While waiting to cross the street at Time Square I took my camera out of my pocket and my bus return ticket slit out along with it and fell into the gutter. It was sitting right there, but I couldn't reach it through the tight metal bars (I didn't even bother trying). Of course they didn't believe my story at the bus station, so I had to buy a new ticket. Oh well, it was very nice anyway. Now I want to go back even more, but next time with my wife.
At the gate for the flight back to Hamburg I saw someone I had seen already on the flight to San Francisco and at the WWDC, so I started talking to him: He's working on the StarOffice port to Mac.
Our plane left an hour late because the lavatory in the back was overflowing (nothing gross, just the blue flushing liquid). I had a whole row to myself, though so I was actually able to get some sleep.
I spent the rest of the day relaxing with my wife. I had to be back at work the next day, but I found out that I still have 14 hours of overtime! So I still have to work today, tomorrow, Monday and a few hours on Tuesday. That's going to my last day at my old job. So the coming weeks will be pretty exciting!
So since yesterday I'm back at work