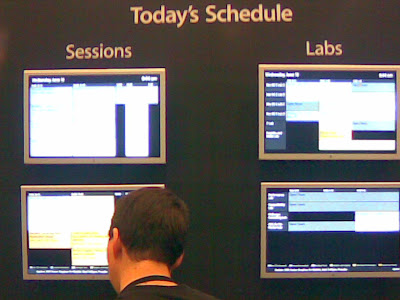 It's Wednesday. I'm in the "Making Your Application Scriptable" session right now. Yesterday night the Apple Design Awards and "Stump the Experts" took place which was a lot of fun. I got up to the mic too but just before I wanted to ask my question the event was over. Oh well, I'll try again next year.
I'm not quite sure which sessions I'll go to today. I'll post again when I know. I'll listen to the session now :)... 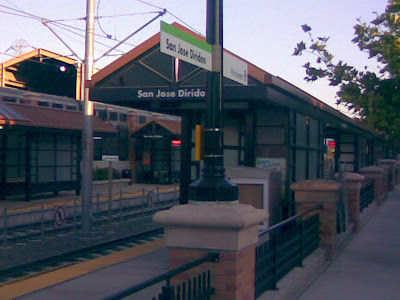 [Update]
Day 3 was very very good. The first session I attended was "Making Your Application Scriptable", then I went on to "Motion Graphics Design Using Quartz Composer" which was incredibly cool. At that session I met an Apple engineer that is working on iPhone Mobile Services. Of course he couldn't tell me WHAT he was working on but he said that it's going to be "way cool", so that's definitely something to look for in the future. I also met a Microsoft engineer (yes, there are actually quite a lot of Microsoft people at the WWDC) who is working on Silverlight. It was very interesting to talk to him about this cool technology. I always wanted to know if the client had to have Python installed if you choose to write your Silverlight app in Python. The answer is no: The Python interpreter is built into the Silverlight runtime. Very cool.
After lunch I went to "Unlocking the Potential of Dashcode". I have played around with Dashcode a bit and it is really impressive. I think I'll have to build my first Widget soon.
After that I went to see "Getting Started with Xray". That was the most impressive session on day 3. Xray is a-ma-zing!
The last session was "Integrating QuickTime Support into Your Application with QTKit" and it was definitely worth attending. I still have a few questions which I'm going to ask today at the QTKit Lab.
On the way home with the Caltrain I met a "GCC Engineer" from Apple. What a cool job title! It was very interesting to talk to him about working on such an important and complex open source project as GCC. He is giving a talk about "Compiler Advances" this afternoon which I'm going to check out. He said the title is too generic so probably no one will turn up ;-) We'll see...