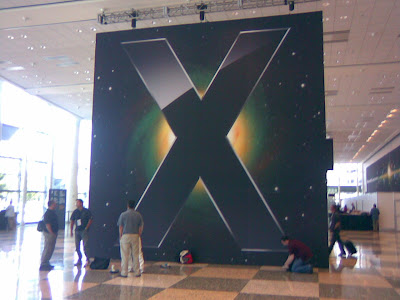 Another gorgeous morning in the Bay Area. The Caltrain just passed the Mountain View station and I'm on my way to day 4 of the WWDC. Some very interesting sessions are waiting for me: First there's "Leopard User Interface Design." After that I'll go down to the QTKit Lab to ask if QTKit would be a good choice to develop an app to recognize multiple barcodes in a picture using for example zebra. If there's still time afterwards I might catch the end of the session "Developing Cocoa Applications with Python and Ruby."
In the afternoon I might go to either "Tracing Software Behavior with DTrace" or "Creating Stunning Effects with Core Image." I'm very impressed by Xray and the session yesterday was great, so I might go see the DTrace session... I'm not sure yet. I can still watch whatever session I missed on the session DVDs that will be sent out to the attendees some time after the conference.
After that I'm going to see the session by the GCC Engineer I met on the Caltrain yesterday: "Taking Advantage of Compiler Advances" and I don't know about the last session yet. So it looks like it's going to be an extremely interesting day at the WWDC again!

[Update]
I'm sitting in the waiting room of the San Francisco Caltrain station on the corner of 4th and King St. I was ingenious enough to manage to miss both the train that left at 7:20 PM and the one that left at 8:25 PM (because I thought it would leave at 8:35 PM...).
Today was a very interesting day nevertheless. The "Leopard User Interface Design" session was very good, lots of great UI guidelines that you can apply to almost any interface. After that I went to the QTKit Lab to ask about that barcode project: Turns out that QTKit would be a good fit for the problem (no surprises there).
At lunch I met a Mac developer from Google who works - among other things - on the GMail notifier which I use every day.
After lunch I decided to go to the Core Image session: a very good decision because I met an Apple engineer who could help me even further with my barcode problem. Then I went on to the "Compiler Advances" session. Some stuff was a bit over my head, but very interesting nonetheless.
I went to the WWDC Bash afterwards. I'll write more about it tomorrow. I'm on the train now, I'm tired and my battery is running low... as well as my laptops.