Posted on 28 May 2008 by Johannes Fahrenkrug. Tags: mac
This is just a short post of frustration: I needed to connect to a Windows Terminal Server today. There is a RDC Client for the Mac by Microsoft. But when I wanted to connect, I got this error: 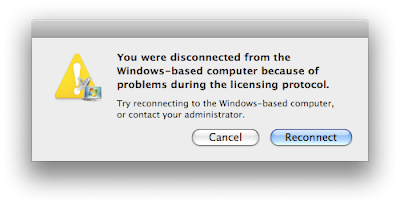 You were disconnected from the Windows-based computer because of problems during the licensing protocol.

What a great message. Turns out a lot of Mac users seem to have the same problem. I used the 2.0 beta 3. But using the old 1.x version yielded a not less cryptic error.
Then this thread finally pointed me in the right direction: CoRD. An open source alternative to the official client from the company that built the Terminal Server in the first place. Why use the open source alternative when there's an official client? Because it has one great feature that I really miss in the Microsoft client: IT WORKS!

So search no more, get CoRD and be happy.

Works for me! I am connecting to a windows 2000 Terminal server. Only one issue is that the keybaord didn't work to start, but playing in the prefferences (and restarting the app) seems to have fixed that. The only other issue is that the color pallet it a bit off, but I don't care. Thanks!

Check to box next to log onto console session in the section where you set up the server.

Nope, no love from CoRD, just opens a window and disconnects with no error message...