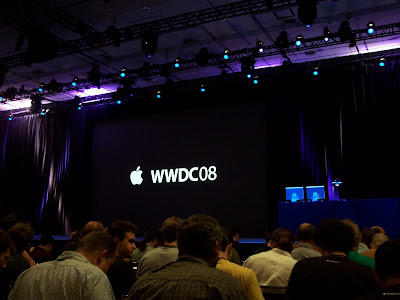 It's Thursday morning, I'm in the Leveraging Cocoa's Layer-Backed Views session right now. Yesterday was a very interesting, successful and fun WWDC day. I first attended iPhone Application User Interface Design: an extremely interesting session on bringing the best experience to your users. It was a good session choice. After that I went down to the Ruby On Rails lab. I was able to ask some deployment and performance questions and met two very talented and resourceful Apple Rails developers. We went in-depth on my questions and I brought my code which was helpful. The good information is that I was on the right track with the solutions I had in mind. And I was introduced to HAML which I'll check out for sure.
Then I attended the lunch time session called Small Teams, Complex Pipelines: Writing Software at Pixar by Dr. Michael B. Johnson which was both entertaining and informative. Lots of similarities between artists and developers and quite a few funny Pixar anecdotes which my confidentiality agreements doesn't allow me to talk about ;-).
After that I checked into my hotel which is just around the block from Moscone West. Parc 55 is a very nice hotel and in a nice area, right in the center.
My first afternoon session was Internationalizing Your Software, nothing exciting but important stuff to know. Then I went down to a Foundation Lab to ask about Web Services and finally attended Cocoa Development Using Scripting about using scripting languages like Ruby to develop Cocoa apps. A very high quality, in-depth and fast paced session. A definite highlight of the conference.
I met Tim Burks in this session (no surprises here) and we could talk about Nu and Nu on the iPhone. It's always great to meet up with the people you know online in person.
The evening consisted of the Apple Design Awards and Stump The Experts. And guess what? I stumped the experts! Well, at least I got a prize and the shirt which is really cool.
I actually just wanted to solve a song and a guy in front of me was faster... but I just stayed in line anyway, waiting to be humiliated. But luckily, Fred asked who was in line just because they were brave and I raised my hand along with 3 other guys. So all four of us solved a question together and all got a prize and the prestigious stump t-shirt. Very nice!

So this was a great and fun day and today will be no different, I'm sure!