Posted on 13 June 2008 by Johannes Fahrenkrug. Tags: wwdc conferences
It's another gorgeous Californian morning in the Bay Area. I'm just passing Sunnyvale on my way up to San Francisco.
Yesterday was the fourth day of WWDC08. After a good night sleep at the Parc 55 hotel right around the corner from Moscone West I had breakfast at the conference. I needed some "help" waking up because I stayed up watching Conan the night before. So what sessions did I go to?
The first one was Cocoa Tips and Tricks: Using Leopard Features Effectively in Mission. A Cocoa framework engineer provided a wealth of information and best practices on topics ranging from drawing in views to memory management and garbage collection. Very important and good-to-know stuff. I stayed in Mission for my second morning session, "Leveraging Cocoa's Layer-Backed Views", also an interesting session, but I didn't take as much away from it as from the first one.
After lunch I headed upstairs to the Presidio for Mastering iPhone View Controllers, given by the same guys how already did the "Understanding" sessions on Tuesday afternoon. They did a great job again, drilling deeper into the stuff you need to know to truly get the most out of them. They wrote the classes, so they really know what they were talking about. After that I actually wanted to go to Polishing Your Cocoa Application, but on the way I saw Introduction to Kerberos. I had already been to a lot of sessions about UI design and Cocoa best practices, so I thought I'd get more out of the Kerberos session. And I definitely learned a lot because the session was a very in-depth explanation of how it works and how it's used on OS X. The final afternoon session before the Bash was iPhone Device APIs: Location, Accelerometer and Camera in the Presidio. A truly great session, especially because of the extensive Q&A after the session. After the guy said "OK, one more question", they actually still answered about 15 more. Very, very informative. 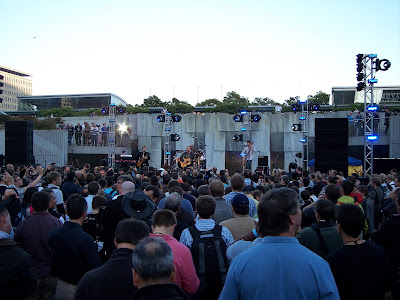 By that time, everyone was looking forward to some free (as in "free beer") beer at the WWDC Bash at Yerba Buena Gardens right next to the Moscone Center. The food was great, including sushi, ribs and dim sum. I met a couple of people again, so it was a lot of fun. A true highlight was the band they got to play at the bash: The Barenaked Ladies. Their songs are really funny and they are absolute Apple fanboys, which I didn't know. So they were joking and told anecdotes all night and the atmosphere was great. Lots of fun all around.


So today is the last day and I hope I can meet a lot of people one last time and hopefully still attend some interesting sessions. We'll see.